Our law firm brings a wealth of experience and knowledge in the area of motorcycle crashes.  Not only do have we represented many people who were involved in motorcycle collisions we know from personal experience the hazards that exist on the roadways for motorcyclists.

A recent study conducted by University of South Florida's Center for Urban Transportation Research, analyzing ten years of data, found that 60 percent of the time motorists in other cars are at fault when there is a collision with a motorcycle. [1]

This recent study confirms the famous Hurt Report[2].  Some of the important findings from that report show:

The National Highway Traffic Safety Administration (NHTSA) estimated that helmets saved the lives of 1,617 motorcyclists in 2011. The NHTSA estimates that if all motorcyclists had worn helmets, an additional 703 lives could have been saved. [3]

Approximately 4.9 million motorcycles were registered in the United States in 2001.  While these represent only 2% of all registered vehicles, motorcycles account for 7% to 12% of all motor vehicle-related fatalities.[4] Overall, they accounted for 11.3 billion person-miles of travel in 1998, averaging 2,640 miles per motorcycle (Federal Highway Administration. 1998 Highway Statistics, Washington DC: FHWA, 1999).[5]  Motorcycles are the most fuel-efficient class of highway vehicle, at 50 miles per gallon (FHWA 1999).[6] Since motorcycles are capable of high speeds and offer little or no occupant protection, they are also the most hazardous highway vehicles: they have the highest crash costs per person-mile (Miller et al. 1999).[7]

A recent report projects the eighth straight increase in motorcycle fatalities. In 2005, 4,315 motorcyclists died, a 7.7 percent increase.[10]  In 2004 it is estimated there were 76,000 persons injured in motorcycle incidents.[11]  It is estimated that medical bills in a non-fatal motorcycle collision on the average range from $10,000 to $30,000 with the average expense involving head injuries around $44,000.[12]  Some authors “estimate that total medical costs (not just acute) account for only about 6 percent of the total costs of motorcycle injuries. Work loss represents 29 percent of the total cost, while pain, suffering, and reduced quality of life represent 63 percent.”[13]  Another author “considered the productivity losses resulting from California motorcycle fatalities. About 80 percent of the motorcyclists who died were under 40 years of age, so the years of potential life lost were quite large. In 1991, 512 fatalities resulted in an estimated 24,435 years of potential life lost, or 3,824 years per 100,000 registered motorcycles. At a discount rate of 3 percent, the productivity losses came to $603 million.”[14]

Rarely does a motorcyclist have sufficient insurance coverage to pay for their medical treatment not including long term care or assistance.  It is extremely important motorcyclists who are severely injured to get the assistance of a qualified attorney immediately.  Evidence may disappear or be lost.  Witnesses move and important information may never be retrieved.  When we take a serious injury case we immediately begin to secure and preserve the important evidence for future analysis.  Most jurors have their ideas about people who ride motorcycles and we will have to overcome those prejudices with hard evidence regarding all of the facts of the crash, tire marks, road debris, eye witness statements, cell phone records, physical condition of the bike and whether any of the persons involved were intoxicated.  Defendants may argue that your motorcycle was not in good mechanical working condition prior to the collision.  Without having the bike available for a forensic inspection their arguments may grab hold of jurors.  Commonly things such as whether the headlamp was lit at the time of the crash may be determined by a forensic examination of the lamp itself.

If you or any of your family members or friends ride motorcycles please have them review the National Safety Council’s Motorcycle Safety Course.  The program is for motorcycle riders who aspire to maintain positive, safety conscious attitudes that result in enjoyable and responsible riding.  The life you save may be your own.

[9] The Anatomy of a Motorcycle Crash, NHTSA 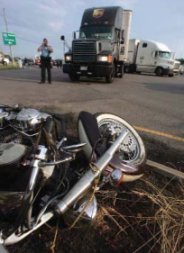