Mark Rouleau is a Graduate of DePaul University College of Law in Chicago, Illinois and began practicing law in 1983.  He was admitted to practice before the State of Illinois Supreme Court on November 9, 1983; the United States District Court for the Northern District of Illinois December 21, 1983 and the Supreme Court of the United States on Aug. 11, 1995.  On behalf of his client’s Mr. Rouleau has obtained numerous verdicts and settlements in excess one million dollars.

For years he has been a powerful advocate for people who are injured through the fault of others.  He has served the public and the legal community by his years of activity in the Illinois State Bar Association, the Illinois Trial Lawyers Association and the American Association for Justice (formerly Association of Trial Lawyers of America).  He is a member of the Million Dollar Advocates Forum and is widely published, including legal texts and journals.  His involvement with the Illinois State Bar Association includes active membership on the Civil Practice and Procedure Section Council Member which reviews and proposes statutes, legislation, court rules and instructions on behalf of the Bar Association as well continuing legal education for practicing lawyers in the State of Illinois.  He also serves on the Committee for Continuing Legal Education for the Illinois State Bar Association where they coordinate and review ongoing education for Illinois lawyers. He formerly served on the assembly for the Illinois State Bar Association and as the Chair, Vice Chair, and Secretary of its Tort Section Council Chair and as a member for more than 6 years.  Tort law is the area of law involving personal injury lawsuits.  The Tort Section reviews and proposes statutes, legislation, court rules and instructions on behalf of the Bar Association in the areas involving personal injury lawsuits.  Mr. Rouleau was also appointed to serve on the ISBA Special Task Force on Allocation of Judges as well as its Special Task Force on Certification of legal specialties.  Mr. Rouleau also was a member of the Illinois Legal Education Conclave which reviewed the continuum of legal education and needs for improvement.  He was also selected to be a member of the ISBA Organized Bar Leadership Conference.  Early in his career he served as the Chair of the YLD Section of the ISBA and previously as the editor of the YLD Newsletter and was an ISBA delegate to the 1994 & 1995 ABA - YLD conventions.

Mr. Rouleau has previously been a member of the Illinois Trial Lawyers Board of Managers Member and has served on its Amicus Committee & Supreme Court Rules Committee.

He has appeared as a speaker on in Sky Radio’s America's Premier Lawyers Hosted by Marc Holland and was formerly a member of the Editorial Advisory Board for James Publishing, Cross Publications and Ford Publications in 1989.

Mr. Rouleau has argued several cases before the Illinois Supreme Court and has also presented numerous appeals.  Similarly Mr. Rouleau is a frequent speaker at numerous seminars conducted for lawyers.

In addition to practicing law Mr. Rouleau has been an active contributor to his community. In the past and presently he has been involved in Habitat for Humanity, Boy Scouting (Eagle Scout – past assistant Scout Master), Board Member of the Institute for Christian Apologetics, Blackhawk Presbytery Commissioner to the PC(USA) General Assembly, June 2004; Blackhawk Presbytery PC(USA) Committee on Ministry (2005 – 2010); Westminster Presbyterian Church (Active Elder 2001-2003), Pastoral Nominating Committee (2004), Christian Education Commission (2001-2003), and Witness Commission (1999-2000), Habitat for Humanity local congregation liaison (1998-99). 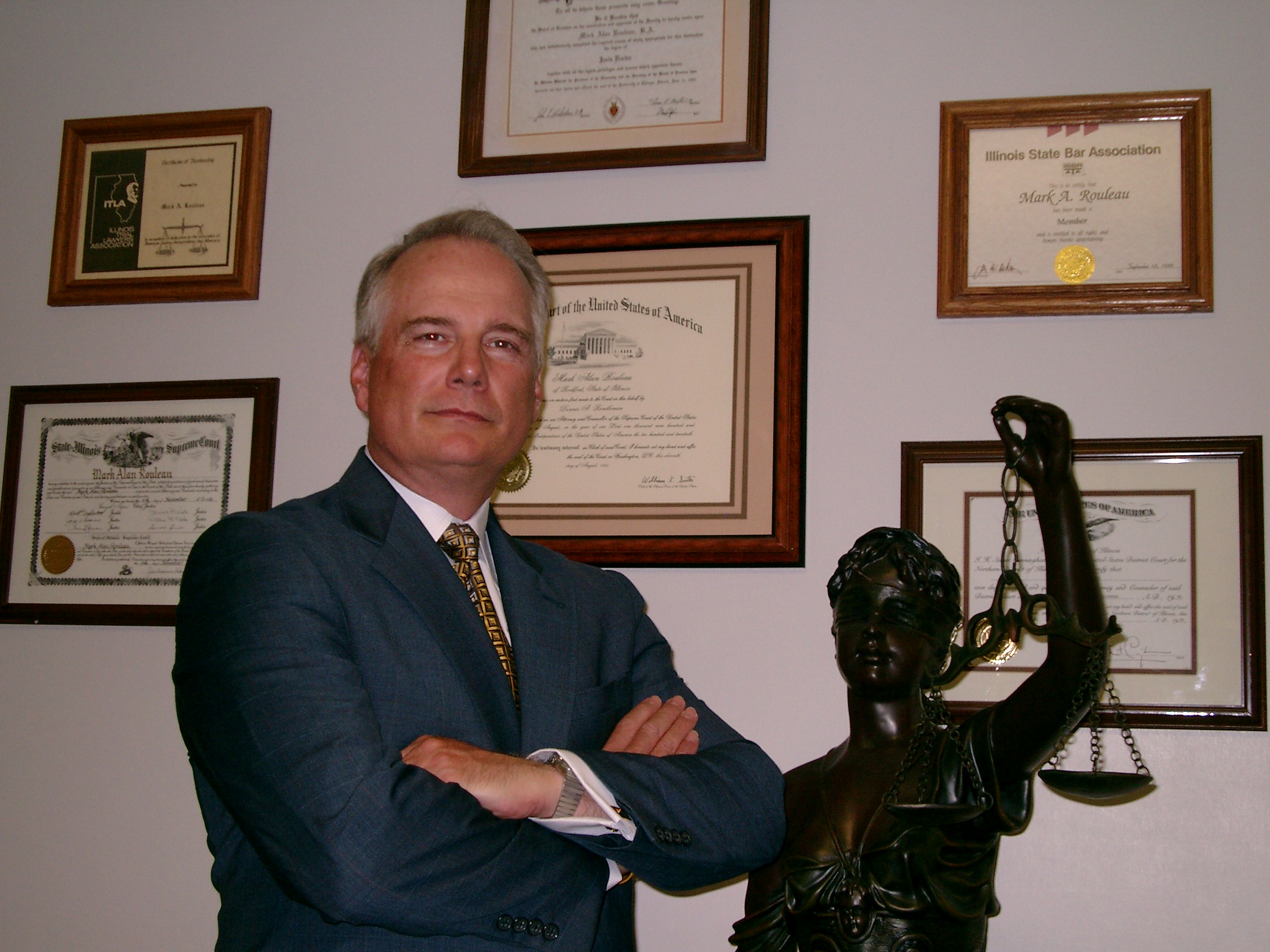 Mark drafted the Amicus Brief for the Illinois Trial Lawyers Association in a case involving a government hospital placing a lien against a child's recovery although the child was prohibited from suing to collect the medical bills that the lien was for. Manago v. County of Cook, ITLA Amicus Brief